This fifth article, which is part of the series on Linux device drivers, is continuation of the various concepts of character drivers and their implementation, dealt with in the previous article.

Earlier in kernel 2.4, automatic creation of device files was done by the kernel itself, by calling the appropriate APIs of devfs. However, as kernel evolved, kernel developers realized that device files are more of a user space thing and hence as a policy only the users should deal with it, not the kernel. With this idea, now kernel only populates the appropriate device class & device info into the /sys window for the device under consideration. And then, the user space need to interpret it and take an appropriate action. In most Linux desktop systems, the udev daemon picks up that information and accordingly creates the device files.

udev can be further configured using its configuration files to tune the device file names, their permissions, their types, etc. So, as far as driver is concerned, the appropriate /sys entries need to be populated using the Linux device model APIs declared in <linux/device.h> and the rest would be handled by udev. Device class is created as follows:

and then the device info (<major, minor>) under this class is populated by:

where first is the dev_t with the corresponding <major, minor>.

The corresponding complementary or the inverse calls, which should be called in chronologically reverse order, are as follows:

Refer to Figure 9, for the /sys entries created using “chardrv” as the <device class name> and “mynull” as the <device name format>. That also shows the device file, created by udev, based on the <major>:<minor> entry in the dev file. 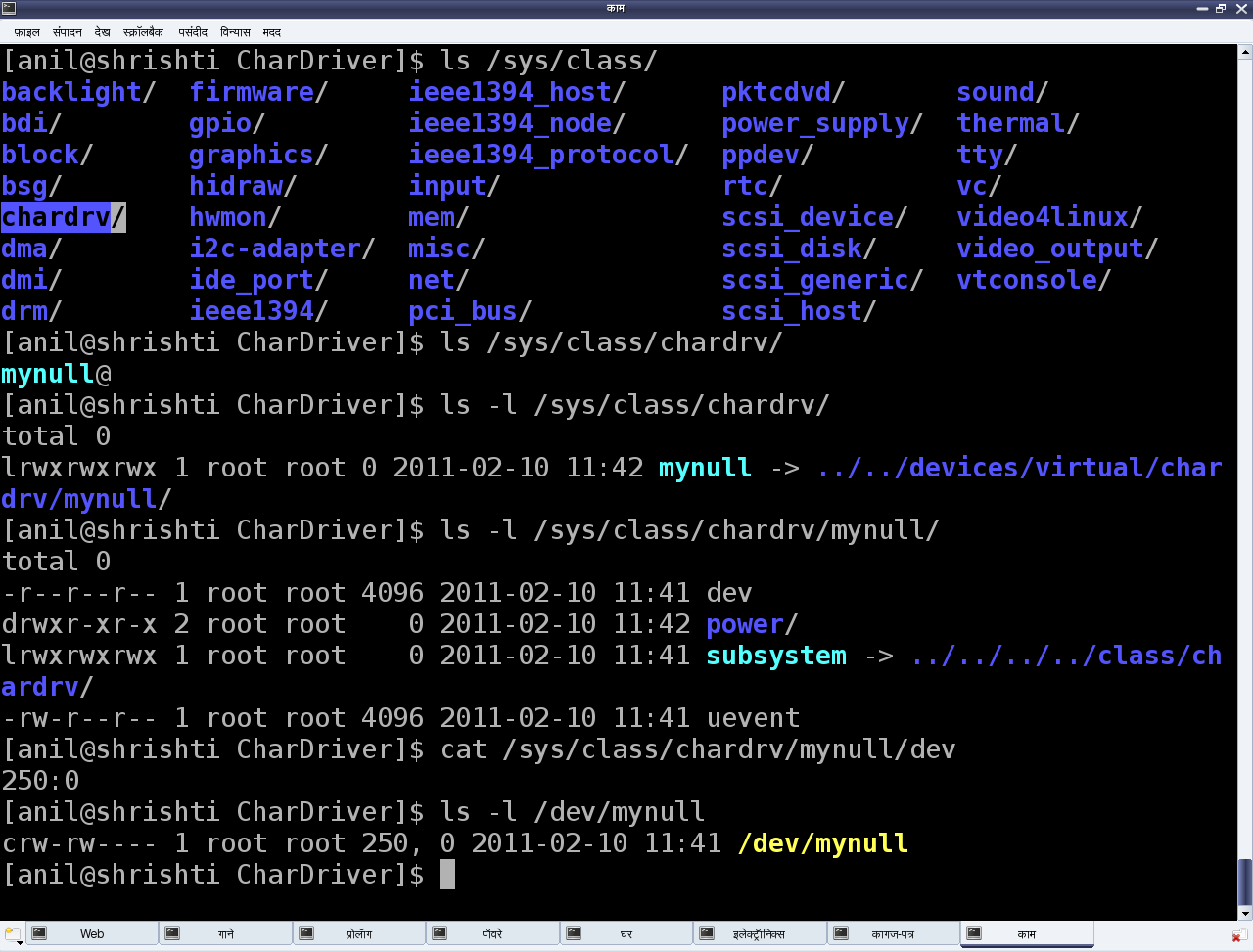 In case of multiple minors, device_create() and device_destroy() APIs may be put in for-loop, and the <device name format> string could be useful. For example, the device_create() call in a for-loop indexed by ‘i‘ could be as follows:

Whatever system calls or more commonly file operations we talk of over a regular file, are applicable to the device files as well. That’s what we say a file is a file, and in Linux almost everything is a file from user space perspective. The difference lies in the kernel space, where virtual file system (VFS) decodes the file type and transfers the file operations to the appropriate channel, like file system module in case of a regular file or directory, corresponding device driver in case of a device file. Our discussion of interest is the second case.

Now, for VFS to pass the device file operations onto the driver, it should have been told about that. And yes, that is what is called registering the file operations by the driver with the VFS. This involves two steps. (The parenthesised text below refers to the ‘null driver’ code following it.) First, is to fill in a file operations structure (struct file_operations pugs_fops) with the desired file operations (my_open, my_close, my_read, my_write, …) and to initialize the character device structure (struct cdev c_dev) with that, using cdev_init(). The second step is to hand this structure to the VFS using the call cdev_add(). Both cdev_init() and cdev_add() are declared in <linux/cdev.h>. Obviously, the actual file operations (my_open, my_close, my_read, my_write) also had to be coded by Shweta. So, to start with, Shweta kept them as simple as possible, so as to say, as easy as the “null driver”.

Following these steps, Shweta put all the pieces together to attempt her first character device driver. Let’s see what was the outcome. Here’s the complete code:

Then, Shweta repeated the usual build with new test steps as follows: 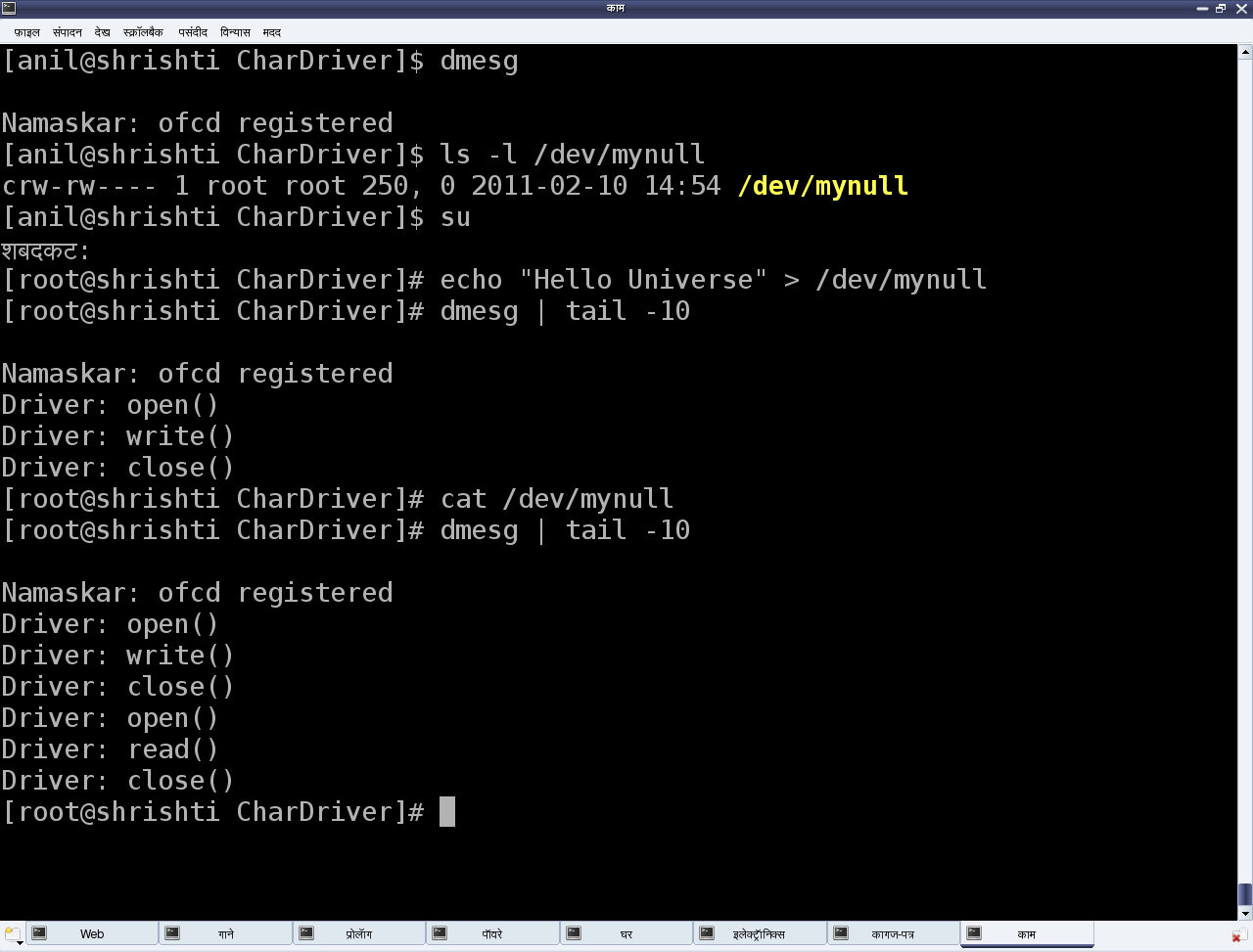 Shweta was surely happy as all on her own she got a character driver written, which works same as the driver for the standard device file /dev/null. To understand what it means, check for yourself the <major, minor> tuple for /dev/null, and similarly also try out the echo and cat commands with it.

But one thing started bothering Shweta. She had got her own calls (my_open, my_close, my_read, my_write) in her driver, but how are they working so unusually unlike any regular file system calls. What’s so unusual? Whatever I write, I get nothing when read – isn’t that unusual, at least from regular file operations’ perspective. Any guesses on how would she crack this nut? Watch out for the next article.

This fifth article of the mathematical journey through open source, introduces the minimal, octave can do for you.

You wanted a non-programmers way of doing mathematics and there you go – octave. Sounds like something to do with music, but in reality it is the name the octave author’s chemical engineering professor, who was well know for his ‘back of the envelope’ calculations.

All of bench calculator!!!

All the operations of bench calculator are just a subset of octave. So, no point going round the wheel again. Whatever operations can be done in bc – arithmetic, logical, relational, conditional – all can be done with equal ease in octave. As in bc, it can as well be used as a mathematical programming language. Ha! Then, why did we waste time on learning bc, we could have straight away come to octave. Yes! Yes! Except one thing – the precision-less-ness. We can’t get that in octave. If we need that, we would have to go back to bc. Okay! Fine. So, what with octave – we start with N-dimensions, what else. Hey don’t worry! In simple language, I mean vectors & matrices.

Matrices with a Heart

Yes, we already saw a matrix in creation. It can also be created through multiple lines. Octave continues waiting for further input by prompting just ‘>’. Checkout below for creating the 3×3 magic square matrix in the same way, followed by various other interesting operations:

Figure 1 shows the plot window which pops up by the command # 9 – plot. 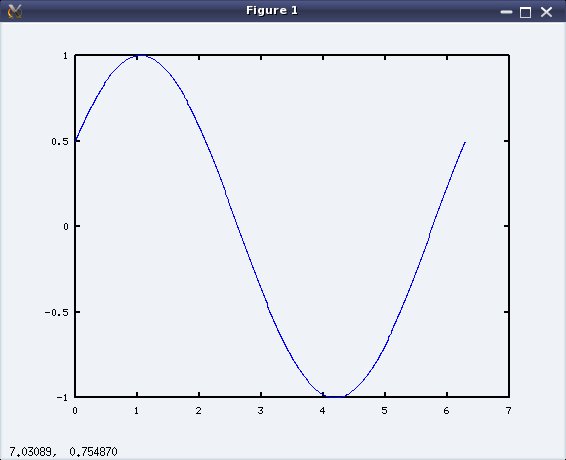 With ready-to-go level of introduction to octave, we are all set to explore it the fun way. What fun? Next one left to your imagination. And as we move on, we would take up one or more fun challenge(s), and try to see, how we solve it using octave.