This seventh article, which is part of the series on Linux device drivers, talks about accessing hardware in Linux.

Shweta was all jubilant about her character driver achievements, as she entered the Linux device drivers laboratory on the second floor of her college. Why not? Many of her classmates had already read her blog & commented on her expertise. And today was a chance for show-off at an another level. Till now, it was all software. Today’s lab was on accessing hardware in Linux. Students are expected to “learn by experimentation” to access various kinds of hardware in Linux on various architectures over multiple lab sessions here.

As usual, the lab staff are a bit skeptical to let the students directly get onto the hardware, without any background. So to build their background, they have prepared some slide presentations, which can be accessed from SysPlay’s website.

As every one settled in the laboratory, lab expert Priti started with the introduction to hardware interfacing in Linux. Skipping the theoretical details, the first interesting slide was about the generic architecture-transparent hardware interfacing. See Figure 11. 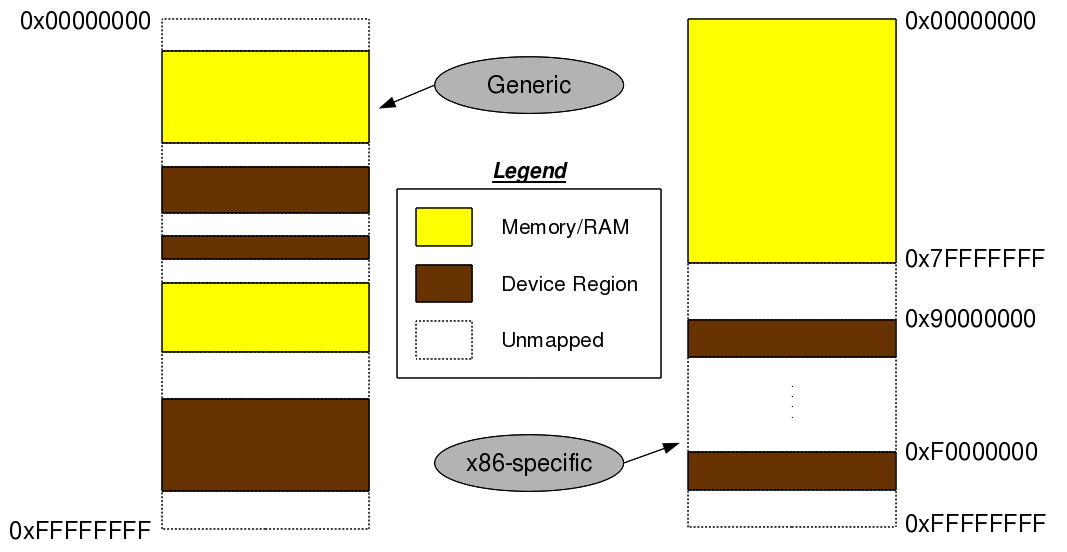 The basic assumption being that the architecture is 32-bit. For others, the memory map would change accordingly. For 32-bit address bus, the address/memory map ranges from 0 (0x00000000) to ‘232 – 1′ (0xFFFFFFFF). And an architecture independent layout of this memory map would be as shown in the Figure 11 – memory (RAM) and device regions (registers & memories of devices) mapped in an interleaved fashion. The architecture dependent thing would be what these addresses are actually there. For example, in an x86 architecture, the initial 3GB (0x00000000 to 0xBFFFFFFF) is typically for RAM and the later 1GB (0xC0000000 to 0xFFFFFFFF) for device maps. However, if the RAM is less, say 2GB, device maps could start from 2GB (0x80000000). 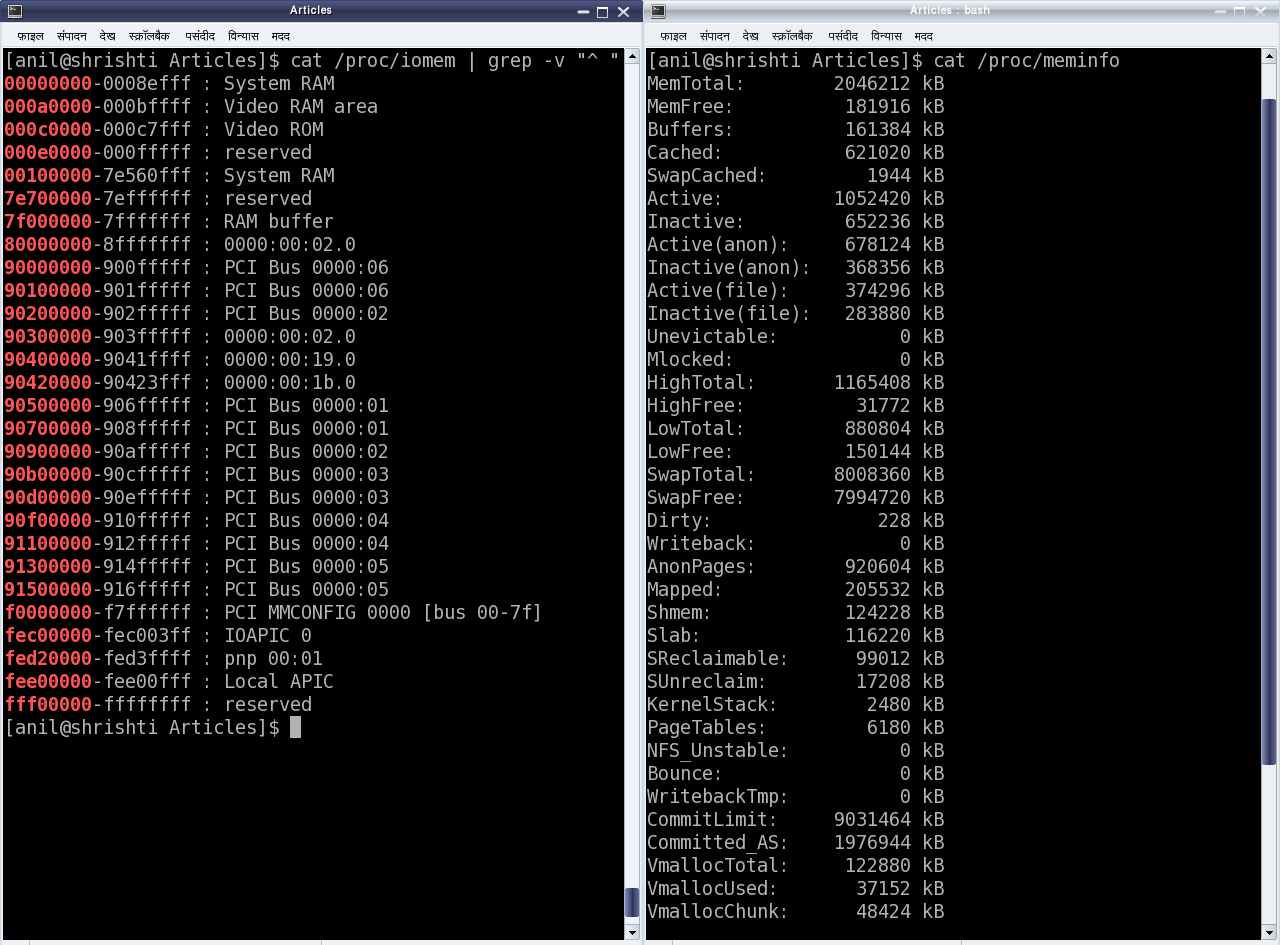 These are prototyped in <asm/io.h>. Once mapped to virtual addresses, it boils down to the device datasheet, as to which set of device registers and/or device memory to read from or write into, by adding their offsets to the virtual address returned by ioremap(). For that, the following are the APIs (prototyped in the same header file <asm/io.h>):

After this first set of information, students were directed for the live experiments. They were suggested to do an initial experiment with the video RAM of “DOS” days to understand the usage of the above APIs. Shweta got onto the system – displayed the /proc/iomem window – one very similar to as shown in Figure 12. From there, she got the video RAM address ranging from 0x000A0000 to 0x000BFFFF. And with that she added the above APIs with appropriate parameters into the constructor and destructor of her already written null driver to convert it into a vram driver. Then, she added the user access to the video RAM through read & write calls of the vram driver. Here’s what she coded in the new file video_ram.c:

Then, Shweta repeated the following steps:

Note 1: Today’s systems typically use separate video cards having their own video RAM. So, the video RAM used in the “DOS days”, i.e. the one mentioned in this article is unused and many a times not even present. Hence, playing around with it, is safe, without any effect on the system, or the display.

Note 2: Moreover, if the video RAM is absent, the read/write may not be actually reading/writing, but just sending/receiving signals in the air. In such a case, writes would not do any change, and reads would keep on reading the same value – thus ‘xxd’ showing the same values.

It was yet half an hour left for the practical class to be over and a lunch break. So, Shweta decided to walk around and possibly help somebody in their experiments.

Matrix Maths is what is formally called Linear Algebra. We have gone through its basics in the fifth article. Now, we shall apply that to practical usage. What better than solving puzzles using the same.

Hence, p = ₹2 and e = ₹4, i.e. each pencil costs ₹2 and an eraser costs ₹4. You may check by putting back these values in our problem statement. Isn’t that cool?

How about finding the intersection point of two straight lines? Let us have the following 2 straight lines, defined in the Cartesian coordinate system, i.e. the x-y system:
4x + 3y = 24
3x + 4y = 25

Similar to the earlier problem, the intersecting point could be obtained as follows:

Figure 5 shows the plot generated by the above code. 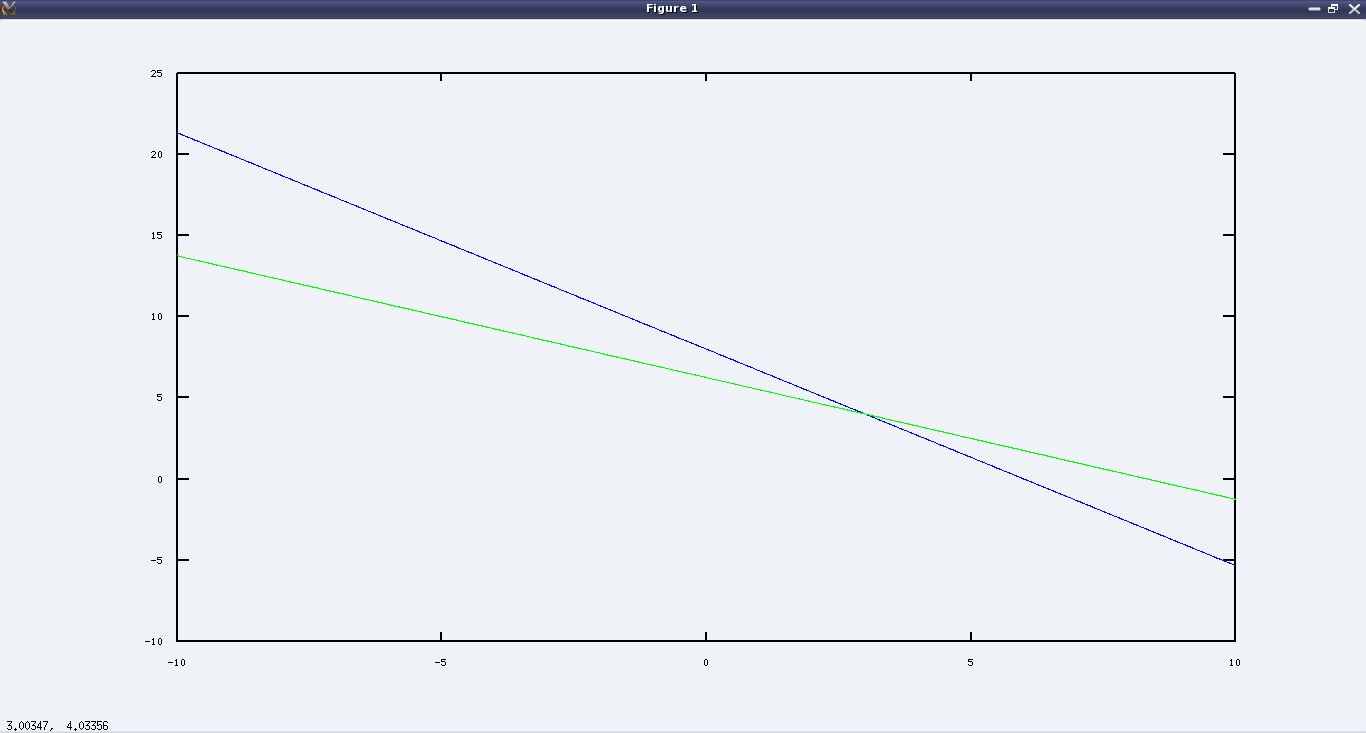 Equipped with the puzzle solving basics, here’s one for your brain: A vegetable seller has placed various equal priced stacks for sale at ₹30. One stack has 4 lemons, 7 cucumbers, 9 tomatoes. Another has 2 lemons, 5 cucumbers, 27 tomatoes. And the third has just 9 cucumbers & 15 tomatoes. Can you compute the price of each vegetable?

Hint: Assume the price of lemon, cucumber, tomato as ‘l’, ‘c’, ‘t’, and then form the 3 equations in three variables.

If you think, you have got it, you may post the solution in the comments. And as we move on, we will get into some different kind of puzzle solving.