This tenth article, which is part of the series on Linux device drivers, talks about kernel space debugging in Linux.

Shweta was back from hospital and relaxing in the library by reading up various books. Since the time she has known the ioctl way of debugging, she has been impatient to know more about debugging in kernel space. The basic curiosity coming from the fact that how and where would one run the kernel space debugger, if there is any. Contrast this with application/user space debugging, where we have the OS running underneath, and a shell or a GUI over it to run the debugger, say for example, the GNU debugger (gdb), the data display debugger (ddd). And viola, she came across this interesting kernel space debugging mechanism using kgdb, provided as part of the kernel itself, since kernel 2.6.26

As we need some interface to be up, to run a debugger to debug anything, a debugger for debugging the kernel, could be visualized in 2 possible ways:

Please note that in both the above cases, the complete kernel source for the kernel to be debugged is needed, unlike in case of building modules, where just headers are sufficient. Here is how to play around with kgdb over serial interface.

Setting up the Linux kernel with kgdb

Pre-requisite: Either kernel source package for the running kernel is installed on your system, or a corresponding kernel source release has been downloaded from http://kernel.org.

First of all, the kernel to be debugged need to have kgdb enabled and built into it. To achieve that, the kernel source has to be configured with CONFIG_KGDB=y. Additionally, for kgdb over serial, CONFIG_KGDB_SERIAL_CONSOLE=y needs to be configured. And CONFIG_DEBUG_INFO is preferred for symbolic data to be built into kernel for making debugging with gdb more meaningful. CONFIG_FRAME_POINTER=y enables frame pointers in the kernel allowing gdb to construct more accurate stack back traces. All these options are available under “Kernel hacking” in the menu obtained by issuing the following commands in the kernel source directory (preferably as root or using sudo):

See the highlighted selections in Figure 15, for how and where would these options be: 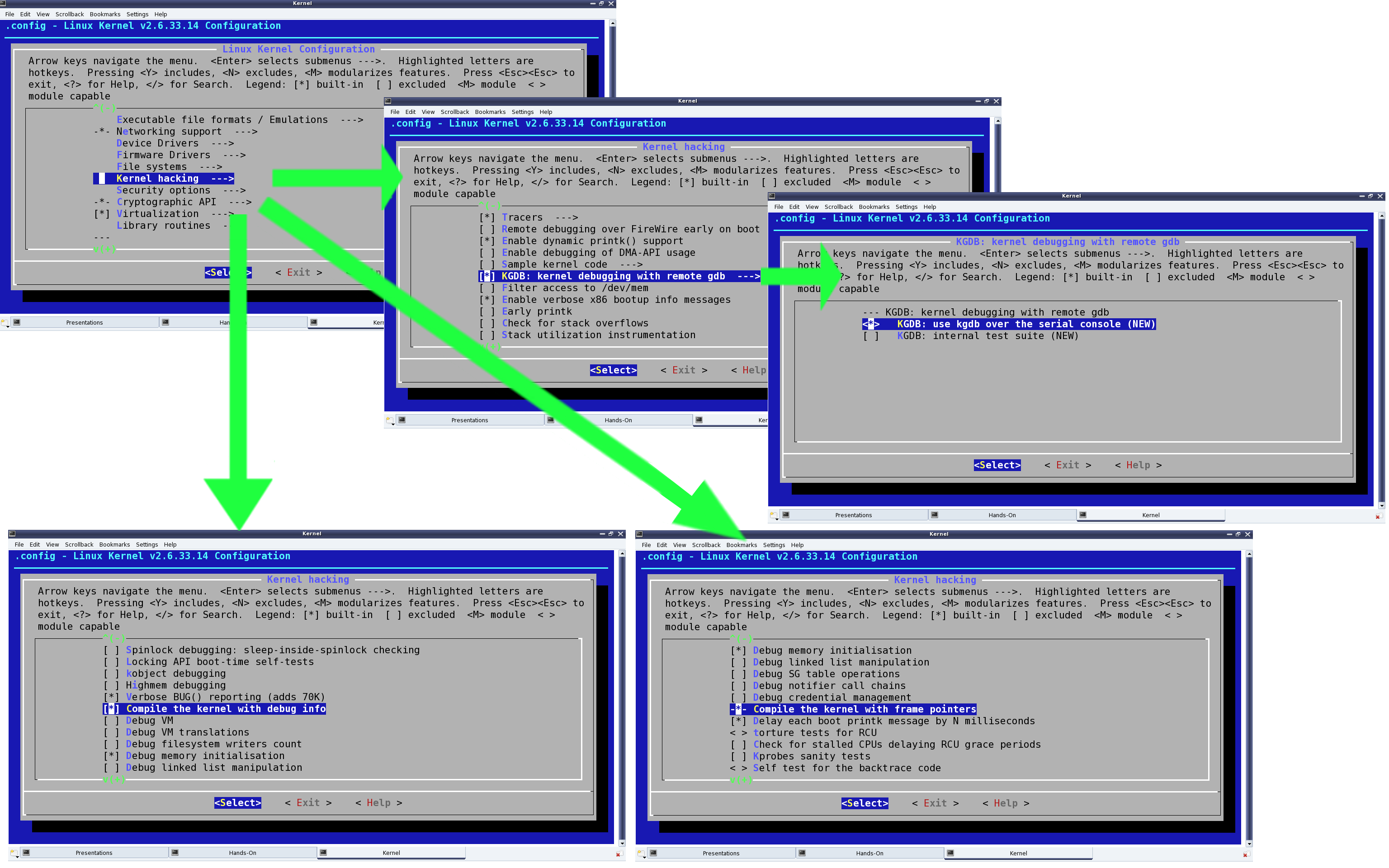 Once configured and saved, the kernel can be built by typing make in the kernel source directory. And then a make install is expected to install it, along with adding an entry for the installed kernel in the grub configuration file. Depending on the distribution, the grub configuration file may be /boot/grub/menu.lst, /etc/grub.cfg, or something similar. Once installed, the kgdb related kernel boot parameters, need to be added to this newly added entry. 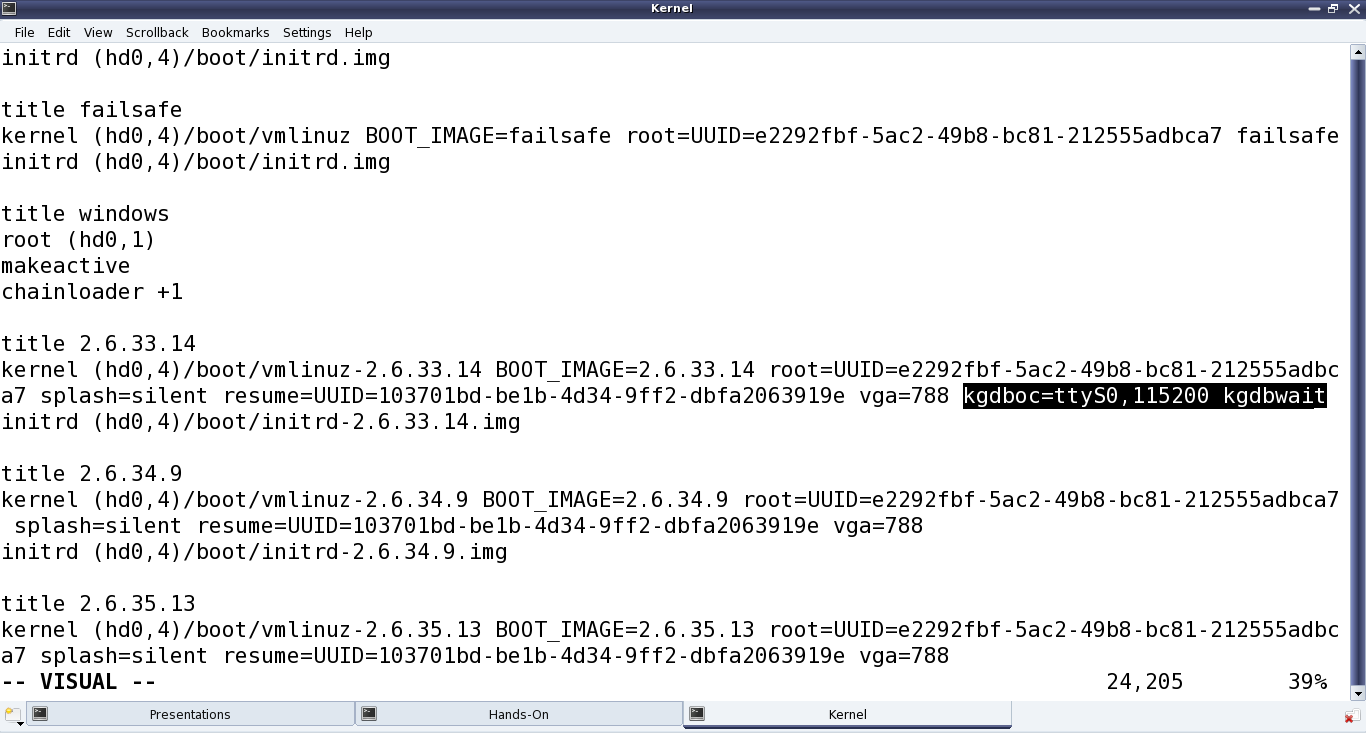 kgdbwait enables the booting kernel to wait till a remote gdb (i.e. gdb on another system) connects to it, and this parameter should be passed only after kgdboc.

With this, the system is ready to reboot into this newly built and installed kernel. On reboot, at the grub‘s menu, select to boot from this new kernel, and then it will wait for gdb to connect with it from an another system over the serial port.

All the above snapshots have been with kernel source 2.6.33.14, downloaded from http://kernel.org. And the same should work for at the least any 2.6.3x release of kernel source. Also, the snapshots are captured for kgdb over serial device file /dev/ttyS0, i.e. the first serial port.

Setting up gdb on another system

Pre-requisite: Serial ports of the system to be debugged and the another system to run gdb from, should be connected using a null modem (i.e. a cross over serial) cable.

Here are the gdb commands to get the gdb from the other system connect to the waiting kernel. All these commands have to be given on the gdb prompt, after typing gdb on the shell.

In the above commands, vmlinux is the kernel image built with kgdb enabled and needs to be copied into the directory on the system, from where gdb is being executed. Also, the serial device file and its baud rate has to be correctly given as per one’s system setup.

After this, it is all like debugging an application from gdb. One may stop execution using Ctrl+C, add break points using b[reak], step execution using s[tep] or n[ext], … – the usual gdb way. For details on how to use gdb, there are enough tutorials available online. In fact, if not comfortable with text-based gdb, the debugging could be made GUI-based, using any of the standard GUI tools over gdb, for example, ddd, Eclipse, etc.

By now, Shweta was all excited to try out the kernel space debugging experiment using kgdb. And as she needed two systems to try it out, she decided to go to the Linux device drivers lab. There, she set up the system to be debugged, with the kgdb enabled kernel, and connected it with an another system using a null modem cable. Then on the second system, she executed gdb to remotely connect with and step through the kernel on the first system.

This tenth article of the mathematical journey through open source, explains advanced polynomial mathematics in octave.

Before we start exploring polynomials further, here’s a couple of basic octave functions to visualize the polynomials. polyout() displays a polynomial in our usual known format. polyreduce() removes the redundant leading zero coefficients. Check out the following:

Assuming the above code is put in the file polynomials.oct, the same can be used as follows:

Interestingly, octave already have the functions for multiplication and division of polynomials, namely conv() and deconv(), respectively. Here’s a demonstration:

Given a set of data points a common requirement in fields of physics, statistics, and many others is to fit a polynomial to it. Going further, we’ll explore the power of octave for the same.