This 23rd article in the series of “Do It Yourself: Electronics”, generates a desired width pulse using IC 555.

After the square wave experiments, Pugs got more interested in understanding all the working modes of 555. His further studies revealed to him that 555 has basically three modes of operation:

Now interestingly, the mono stability could be either in the low output or the high output. Correspondingly, the pulse would be high or low, and the trigger accordingly would be low or high. And for each of these the circuits are slightly different, especially from the perspective as to where the trigger is applied. Recall that voltage below 1/3 of Vcc on trigger pin 2 triggers output Vo pin 3 to high and voltage above 2/3 of Vcc on threshold pin 6 brings back output Vo pin 3 to low.

Below are the corresponding schematics, and the breadboard connections made by Pugs: 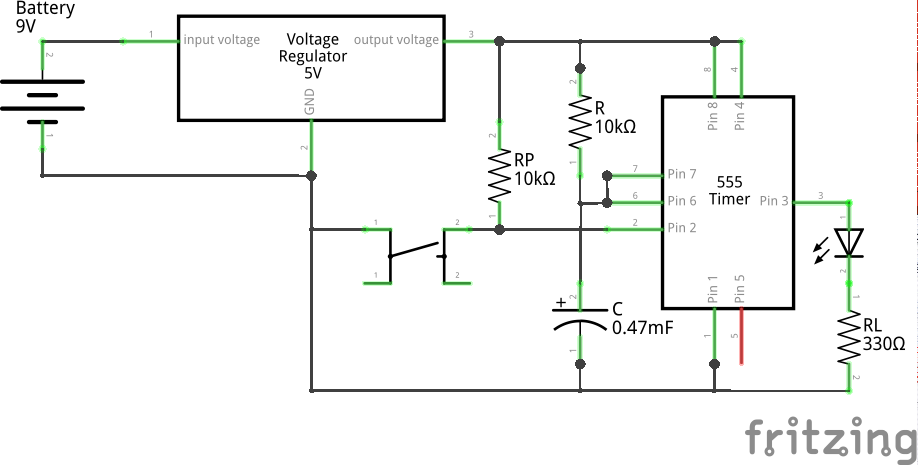 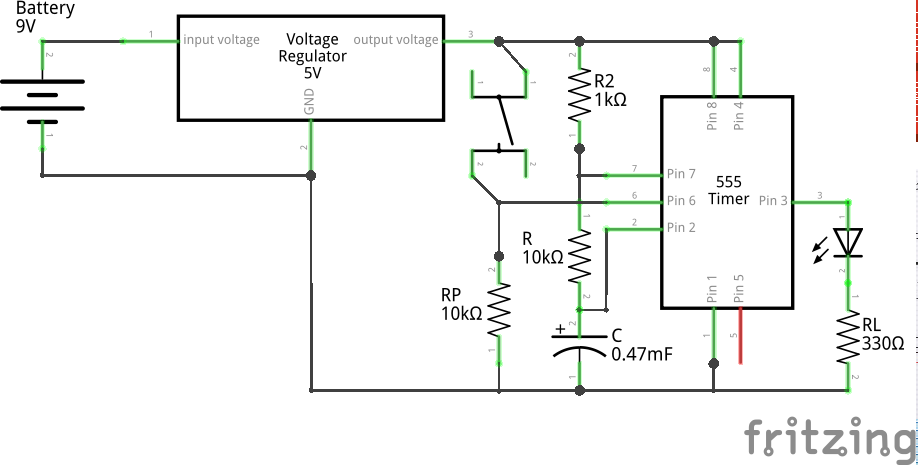 … (6)
One may derive this, using the methodology similar to the one used in this previous article. So, it is left to the reader to derive the same.

As in previous articles, Pugs tried observing the Vo output waveforms on the home-made PC oscilloscope, as created in his previous PC Oscilloscope article. But he observed nothing other than noise, except some change when he presses the switch. This reminded him that the home-made PC oscilloscope filters out low frequency (DC) voltages, and with such low frequency Vo, there would be nothing left to observe after filtering, except when there is some change on switch press. So, Pugs decided to rather use a multimeter. But, then got the idea of putting an LED instead, which is what is visible in the above circuitries.

And here are the three video clips of the LED blinkings observed in the three cases:

Observe the closeness of the pulse width timing (with a watch) from the above videos compared with the expected values.

Also note that during the low pulse (monostable high) experiment, Pugs is waiting for another 5+ seconds after the output Vo is high, before pressing the switch again. In fact, when he tried doing it without waiting, this is what he observed:

That’s weird – the pulse width also has reduced. But why is that? Possibly, because the capacitor is not charged back to the full, before the switch press and so it got discharged faster. That brings to the point, that derivation of equation 6 assumes that the capacitor is completely discharged in the first case (monostable low) and completely charged in the second case (monostable high), before the trigger. If not, the calculations would vary. Now, in the first case the capacitor gets immediately discharged as it is directly grounded through discharge pin 7. So, such scenario wouldn’t happen with that. However, in second case the charging is through resistors R & R1, so that would take its own time based on the RC value, which in the above case is 5+ seconds ((10 + 1)K * 470u). To avoid this, Pugs possibly would have to by-pass the big R in the charging cycle by putting a diode in parallel with R. If you believe it, go ahead and try it out.

Note: R1 has been taken small compared to R, exactly for reducing the RC effect. However, it cannot be made zero, as that would short the Vcc & GND (from discharge pin 7) when the low pulse is getting output on Vo.