This fourth article, which is part of the series on Linux device drivers, deals with the various concepts of character drivers and their implementation.

Shweta at her hostel room in front of her PC, all set to explore the characters of Linux character drivers, before it is being taught in the class. She recalled the following lines from professor Gopi’s class: “… today’s first driver would be the template to any driver you write in Linux. Writing any specialized advanced driver is just a matter of what gets filled into its constructor & destructor. …”. With that, she took out the first driver code, and popped out various reference books to start writing a character driver on her own. She also downloaded the on-line “Linux Device Drivers” book by Jonathan Corbet, Alessandro Rubini, Greg Kroah-Hartman from http://lwn.net/Kernel/LDD3/. Here follows the summary from her various collations. 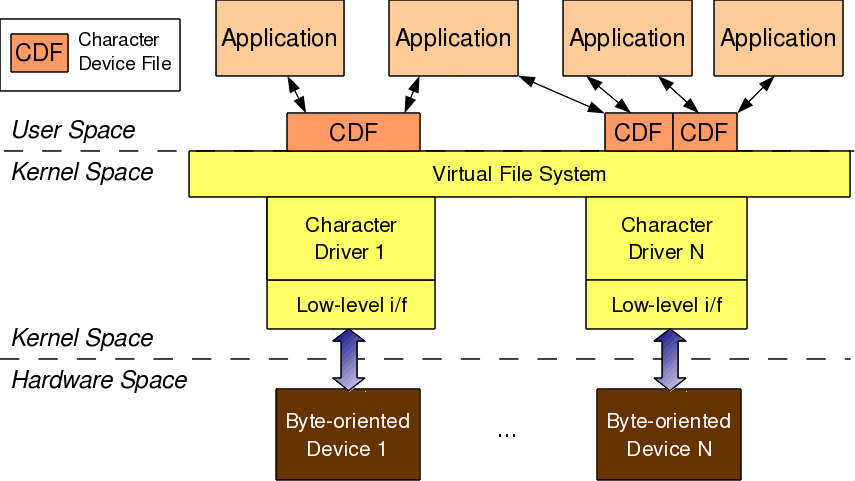 As shown in Figure 7, for any application (user space) to operate on a byte-oriented device (hardware space), it should use the corresponding character device driver (kernel space). And the character driver usage is done through the corresponding character device file(s), linked to it through the virtual file system (VFS). What it means is that an application does the usual file operations on the character device file – those operations are translated to the corresponding functions into the linked character device driver by the VFS – those functions then does the final low level access to the actual devices to achieve the desired results. Note that though the application does the usual file operations, their outcome may not be the usual ones. Rather, they would be as driven by the corresponding functions in the device driver. For example, a read followed by a write may not fetch what has been written into, unlike in the case of regular files. Note that this is the usual expected behaviour for device files. Let’s take an audio device file as an example. What we write into it is the audio data we want to playback, say through a speaker. However, the read would get us the audio data we are recording, say through a microphone. And the recorded data need not be the played back data.

In this complete connection from application to the device, there are four major entities involved:

And the interesting thing is that, all of these can exist independently on a system, without the other being there. So, mere existence of these on a system doesn’t mean they are linked to form the complete connection. Rather, they need to be explicitly connected. Application gets connected to a device file by invoking open system call on the device file. Device file(s) are linked to the device driver by specific registrations by the driver. And the device driver is linked to a device by its device-specific low-level operations. Thus, forming the complete connection. With this, note that the character device file is not the actual device but just a placeholder for the actual device.

First step is achieved using either of the following two APIs: (defined in kernel header <linux/fs.h>)

In the constructor, she added:

In the destructor, she added:

Putting it all together, it becomes:

Then, Shweta repeated the usual steps, she learnt for the first driver

Additionally, before unloading the driver, she peeped into the kernel window /proc/devices to look for the registered major number with the name “Shweta” using cat /proc/devices. It was right there. But she couldn’t find any device file created under /dev with the same major number. So, she created them by hand using mknod, and then tried reading & writing those. Figure 8 shows all these. Please note that the major number “250” may vary from system to system based on the availability. Figure 8 also shows the results, Shweta got from reading & writing one of the device files. That reminded her that the second step for connecting the device file with the device driver – “Linking the device file operations to the device driver functions” is not yet done. She realized that she needs to dig further information to complete this step and also to figure out the reason for the missing device files under /dev. We shall continue further in our next article, to figure out what more is Shweta learning and how is she going ahead with her first character driver. 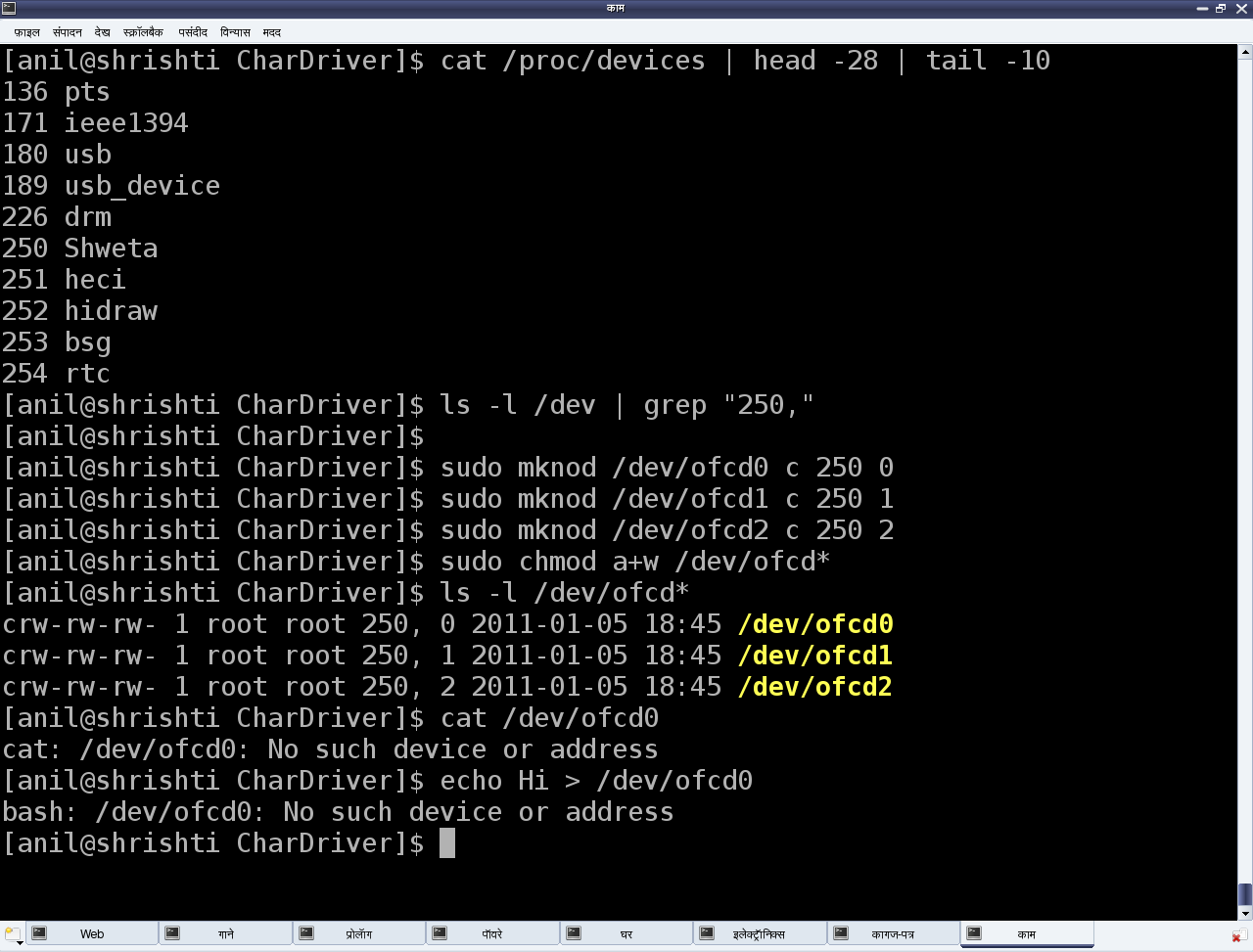